I am currently working on the next update. It won’t be a super-big one, but it will have 4 new maps for the time attack mode. Here you have two of them: 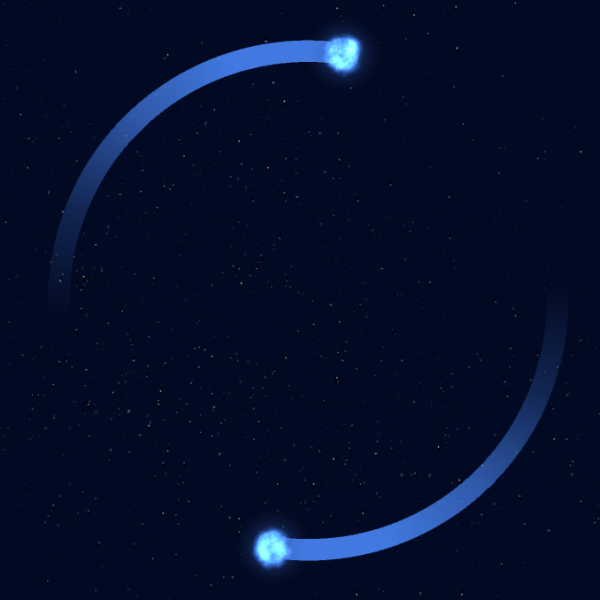 Size is not to scale (first stars are blue giants and the next ones are red dwarfs).

These maps will be a new kind of challenge, because it is more difficult (or impossible) to brute-force the creation of planets into a stable orbit. It requires more skill.

I am also adding the capability of sharing a screenshot of your system or score, natively. This is important because some of you create very cool systems and want to show them to friends, but taking a screenshot with the volume+on buttons (or similar depending on the device) without pausing, then going to the stored screens, then sharing… is not the fastest thing in the world. Not only that: you usually don’t want to keep the screens in the device after sharing. They are now on the glorious Internet! So now, with the next update, you’ll just: Pause -> Share. Done! Also, only the last screenshot will be saved in the phone/tablet, so you won’t have to clean them in order to free space. If you want to keep them, go for the traditional screenshot.

The only thing I don’t like about the sharing option is that requires new permissions. Android says “New permission required: Make Your Solar System is trying to access your photos and media files” or something similar. It looks so serious, all because I need write permissions for storing the screenshot prior to share it. I spent four days trying to avoid that, but looks like is not possible.

Another different kind of news that affect the development of the game, is the fact that I got a new job. Last months I had some free time, time that I won’t have anymore, so the development will be slower now. My communication with you could take all the week (until it’s weekend). I will try my best. The good news is that the greatest part of the programming is done and adding new content is easier than programming the core, so they will be updates anyway 🙂

Maybe some of you are wondering why I don’t want comments in the blog. I like all kind of feedback, but I am just one person with very limited time (work, hobbies, surviving at home… :P) and I have to think on the game design, program it, manage the social stuff… you can imagine. So I prefer to have all in one place, just for speed. The publications are notified in Twitter @MYSSgame and Facebook http://www.facebook.com/makeyoursolarsystem, for now I am using Twitter for short comments and the email makeyoursolarsystem@gmail.com for bugs or long comments you prefer not to publish. For now it’s working well.

I will answer some questions and feedback on the Play Store soon, but I won’t go there frequently.

As you like to create shapes with orbits, I will add an Options -> Visuals menu with interesting stuff, like minimalistic graphics and different orbit trail lengths (or no orbit at all even. It is crazy to select a planet with the camera and feel like the star is orbiting it, without the reference of the orbits). But this is for other update, not the next.

I am also thinking on a new kind of mode: Supernova. In this one, stars will always be unstable blue giants and the first object that impacts against one of them… BOOM! Game over. But this is also for the future, not the next update. I am opened to other ideas for modes.

I also want to have some way to identify objects as moons, but this is difficult as it is related with orbital mechanics instead of just size. I will do it sooner or later.

I hope you are having a good time with Make Your Solar System! See you.